Please Read This Great Review of “Haiku and Senryu: A Simple Guide for All”

Posted on August 9, 2015 by Charlotte Digregorio

I just read another great review of my book, Haiku and Senryu: A Simple Guide for All. This just appeared in The Rockford Review, and I gratefully thank  the reviewer, Connie Kuntz. For those of you who don’t know what senryu is because you haven’t yet read my blog posts, it is in the same form as haiku, but it focuses on human nature and is often humorous. Many people don’t differentiate between haiku and senryu, but I do in my book. 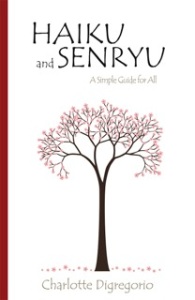 Below is the latest book review:

Passionate, clear, well-supported instruction about haiku and senryu. I have always enjoyed haiku, but have never fully understood its intricacies, of which there are many. Digregorio’s guide helps people understand the difference between haiku  and senryu. She encourages experimentation and her instruction is always gentle. Any artist will revel in the splendor, humor, and knowledge this book has to offer. Reading this was therapeutic for me because there are dozens of haiku and senryu examples. I consider this book a must-have for any writer or reader and will keep my copy near me whenever I write.

Friends and followers, if you haven’t already, investigate the previous posts I’ve written, and of course, be sure to read The Daily Haiku and the great haikuists I feature! They will change the way you think and look at life.