Posted on September 30, 2021 by Charlotte Digregorio 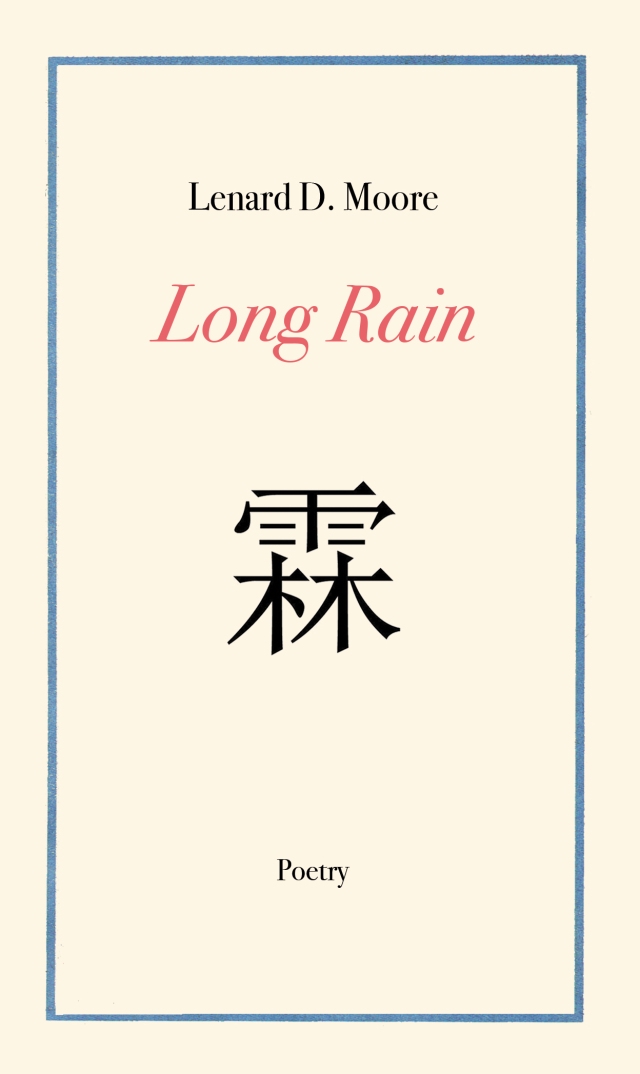 Lenard D. Moore, whose work is often featured on this blog as a consummate haikuist, has just published a collection of his tanka and haibun. Featured below are a few samples from his book, “Long Rain”:

She stood ironing board-straight, as if she had a basket on her head, born twenty-four years after the Civil War. I am still captivated by her stern, steady ways of working: brown hands gripped the hoe, chopping weeds away from rows and rows of corn and peanuts, a blue apron around her waist, bonnet on her head. She died in 1972. She walked up and down sun-beaten rows, chopped weeds as steady as machines. Her wooden quilting frame took up most of her front room, hands stitching a patchwork. I am fond of unraveling the quilt of this memory. How could I scissor the thread of that time? It remains here.

where the garden used to be

stopping to watch the woodpecker

who hammers on the barn

she bends over the washtub

and how warm wind scatters

the scent of her perfume

how many bullfrogs telling

as I walk the soggy earth

that my grandfather once plowed

To learn more about this book, visit

I publish books. I have marketed and/or published 55 titles. These books are sold in 46 countries to bookstores, libraries, universities, professional organizations, government agencies, and book clubs. In 2018, I was honored by the Governor of Illinois for my thirty-eight years of accomplishments in the literary arts, and my work to promote and advance the field by educating adults and students alike. I am the author of seven books including: Haiku and Senryu: A Simple Guide for All; Everything You Need to Know About Nursing Homes; You Can Be A Columnist; Beginners' Guide to Writing & Selling Quality Features; Your Original Personal Ad; and my latest, Ripples of Air: Poems of Healing. The first four books have been adopted as supplemental texts at universities throughout the U.S., Canada, India, Pakistan, and Catalonia. They are sold in 43 countries, and are displayed in major metropolitan cultural centers. These books have been reviewed, recommended, and praised by hundreds of critics, librarians, and professors worldwide. I am also the author of a poetry collection: "Shadows of Seasons: Selected Haiku and Senryu by Charlotte Digregorio." Two of my books have been Featured Selections of Writer's Digest Book Club. I am regularly interviewed by major print, radio, and television organizations throughout the U.S. I regularly sign books at libraries, chain bookstores, and university bookstores, and do poetry readings at art centers, cafes, tea houses, and galleries. I was recently nominated for two Pushcart Prizes in poetry. I have won fifty-nine poetry awards, writing fourteen poetic forms. My poetry has been translated into eight languages. I do illustrated solo poetry exhibits 365 days a year in libraries, galleries, corporate buildings, hospitals, convention centers, and other venues. My individual poems have been displayed at supermarkets, apparel and wine shops, banks, botanic gardens, restaurants, and on public transit. I have been nominated and listed in "The International Authors and Writers Who's Who" in Cambridge, England and in the "Who's Who In Writers, Editors & Poets U.S./Canada." I hosted my own radio program, "Poetry Beat," on public broadcasting. My poetry has been featured on several library web sites including those of Shreve Memorial Library in Louisiana and Cornell University's Mann Library. My background includes positions as a feature editor and columnist at daily newspapers and as a magazine editor. I have been a public relations director for a non-profit organization. I am self-employed as a public relations/marketing consultant, having served a total of 118 clients in 23 states for the past several decades . In other professional areas, I have been on university faculties, teaching French, Italian, and Writing. I regularly give lectures and workshops on publishing, journalism, publicity, poetry, and creativity to business and professional groups, and at writer's conferences, universities, literary festivals, non-profit organizations, and libraries. I have been a writer-in-residence at universities. There have been about 400 articles written about me in the media. I have served on the Boards of writers and publishers organizations. My positions have included Board Secretary of the Northwest Association of Book Publishers. I served for five years as Midwest Regional Coordinator of The Haiku Society of America, and for two years as its Second Vice President.
View all posts by Charlotte Digregorio →
This entry was posted in Author, book, Haibun, Lenard D. Moore, Poetry, Short Poems, Tanka and tagged book, Haibun, Japanese-style poetry, Tanka. Bookmark the permalink.

7 Responses to Collection of Tanka & Haibun by Lenard D. Moore